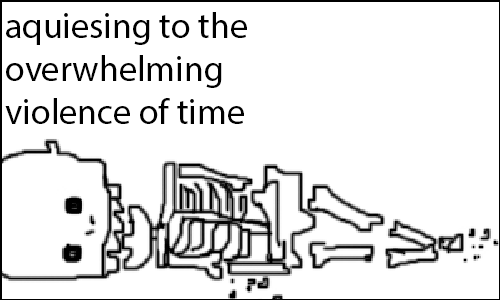 Acquiescing to the Overwhelming Violence of Time was a game that Tara Ogaick and I made for the Creative Conflict Jam run by Autumn Nicole Bradley over at her blog. The idea behind the jam was to create a game that solved conflicts in a way that traditional games don't; our choice was to make a game that accepted longer timescales as a way of "solving" this problem (which, if I remember, we were [rightly, maybe] criticized for on Twitter).

You can read my original writeup about the game here.

Tara Ogaick made all of the art and the music.

You can play Acquiescing to the Overwhelming Violence of Time by clicking here.